By TchoukballOnFire on December 31st, 2014 in Tchoukball on Fire | Leave a Comment 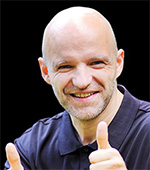 Thomas Langescheid got in contact with Tchoukball whilst his activities in the board of the club TuS Oeckinghausen and the ‘Association of Sports Clubs in the city of Halver’. In these positions he accompanied and promoted Tchoukball in Halver. Thomas is President of DTBV (German Tchoukball Federation) since October 2012, after the death of the first DTBV President Karin de Laporte in May 2012. He is a mechanical engineer and specialized in engineering design.

Joachim Fromm is a journalist, worked as an editor for newspapers and radio. Today he is a project manager for small as well as large, highly complex digital projects. As a teenager, Joachim played volleyball and handball and went canoeing in a club. For Tchoukball he came about his son, who had learned the sport in a voluntary additional offer in the school. Joachim plays in a purely recreational sports team of his Club SG Urbich and is a board member of the German Tchoukball Federation and the Tchoukball Federation of Thuringia.

In this interview, Thomas and Joachim explain to us how Tchoukball has been developing in Germany, the organization of the 2014 European Tchoukball Championship, the number of staff, and why they wanted to organize this event. They also explain what are the obstacles to promote the game in Germany.

Next episode: Melissa Wang of Singapore

By TchoukballOnFire on December 1st, 2014 in Tchoukball on Fire tags: Chris Huang, Episode 23 | Leave a Comment

Chris Huang is a physical education teacher, and leaves in Kaoshiung Taiwan .

Discovering the game while in college, Chris did a master and his memoir was on Tchoukball history in Taiwan. Chris is also the president of the International Federation of Tchoukball (FITB). Chris is a n enthusiast supporter of the game, and he is spending time, energy and money to promote Tchoukball around the world.

You can contact him at: chris.huang2(at)tchoukball.org
www.tckoukball.org or www.fitb.org
www.facebook.com
Next episode: Thomas Langescheid and Joachim Fromm, of Germany, President and PR of Tchoukball Germany, as well as the organizers of the 2014 European Tchoukball Championships (ETC)

By TchoukballOnFire on November 3rd, 2014 in Tchoukball on Fire tags: Episode 22, Richard Torok | Leave a Comment

Discovering the game in 2011, by finding two frames in his PE Equipement storage marked Tchouikball, he was intrigued and wanted to discover what kind of game was Tchoukball and how it was played. Then with his students he started to train them and made some videos. After one participation to the 2013 USTBA Tchoukball Championship with one team, in 2014 Richard came to the Championship with two teams. Richard is an enthusiastic person and he loves Tchoukball.

Richard is also working with Steve Abreu of Boston for the promotion of the sport outside of schools.

In this interview, Richard explains how he discovered the game, what are his motivations to promote the game, as well as his goals for the next 5 years.

You can contact him at: tchoukballnj(at)gmail.com
www.facebook.com/TchoukballNJ
Twitter
Next episode: Chris Huang, of Taiwan, and President of the International Federation of Tchoukball, (FITB)