By TchoukballOnFire on May 28th, 2014 in Tchoukball on Fire tags: Claudio Brenna, Episode 18 | Leave a Comment

Claudio Brenna is 26 years old, and works as a researcher consultant in p 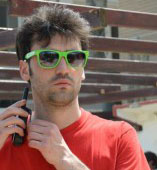 He discovered Tchoukball as a high school student volunteering as a staff member in the 2006 Tchoukball Beach Festival edition. In 2009, he became the main coordinator of the world biggest Tchoukball event.

In this interview Claudio explains to us what are his motivations to manage the Beach Tchoukball Festival, and why he wants to create more than just a Tchoukball tournament.

The Back Stage of 2014 Tchoukball Beach Festival in Rimini

By TchoukballOnFire on May 24th, 2014 in Tchoukball on Fire tags: Special Episode 3, Tchoukball Rimini 2014 | Leave a Comment

In this special episode, we would like to share with you, what does it takes to create a Tchoukball event where more than 1200 players enjoyed every year.

This episode features Matteo Castelli, Andrea Volonté, Giko Zinetti, from the organizer’s core team, and players from Czech Republic, Switzerland, Italy. They explain what they are doing, as well as why they like Tchoukball and the event.

Tchoukball on the Reunion Island (France)

By TchoukballOnFire on May 6th, 2014 in Tchoukball on Fire tags: Episode 17, Richard Parassouramin

Richard Parassouramin lives on La Reunion Island, France, he is the father of two children and soon another one, he is a physical educator in a high school. Richard is a former handball players. His wife told him about Tchoukball and this is how he discovered the game.

He introduced Tchoukball to his students in September 2012. In 2012, he also founded a Tchoukball club in St. Benoit, with twenty players, and today the club has about fifty players playing the sports. In 2013, with the M18 team, he represented France at the World Youth Tchoukball Championship held in Taiwan.

Richard is really interested in the fact that Tchoukball could be played by mixed genders, half of the members of his club, are females from age 6 to adults.

In this interview, Richard explains to us why he likes Tchoukball, how he achieved to have a team of M18 going to Taiwan in less of 6 months, and what are his projects on the island and in the Indian Ocean basin.